Please register and Join Us!

Abstract: Dr. William W.H. ‘Bill’ Gunn (1913-1984) was an international pioneer and key popularizer of ‘nature’ sound recordings. As the creator of numerous published field recordings of birds as well as wildlife soundtracks for the Canadian Broadcasting Company’s ‘The Nature of Things’, Gunn recorded landscapes in the Galapagos Islands, East Africa, Sri Lanka and locations across Canada including its Far North. In addition to his leading roles in conservation, he was one of Canada's first environmental consultants: Gunn's research in bird behaviour and migration was actively applied to industry as well as to public education. Gunn taught Canadians how to listen to birds.

This talk, developed with the assistance of Dr. Robin Westland and Mitchell Patterson, focuses on Gunn’s earliest fieldwork in Canada’s North as a member of Exercise Muskox (1946), a sovereignty exercise carried out by the Canadian Army. The 5037 kilometre journey was set to demonstrate Canada’s capacity for military presence in areas previously inaccessible to the Army for winter travel. The duties of Lt. Col. Gunn, Ordinance Corps, included collecting and documenting wildlife, practices recorded in his field diary, his photography, preserved bird specimens and military reports. In exploring his encounters with ptarmigan, snowy owls, spruce grouse and Canada Jays, we reconsider his developing field techniques and listening positionality in terms of military technologies and practice, his relations with Inuit “fellow travellers,” as well as his subsequent appeals to young Canadians to ‘listen with all your might’.

Laura Jean Cameron, a professor of historical geography at Queen’s University, coordinates the Sonic Arts of Place Lab which specializes in the aural/oral history and resonance of places and investigates a range of field sciences as place-based practices and cultural encounters. Her latest book, Friend Beloved: Marie Stopes, Gordon Hewitt, and an Ecology of Letters, was launched earlier this month. Her current writing and listening is directed towards a research-creation project with sound artist Matt Rogalsky on the life and work of early Canadian field recordist William WH Gunn.

Matt Rogalsky works in live electronic music composition and performance, sound installation, and study of late 20th century compositions by David Tudor and other composers. He has been active in performance of David Tudor’s music since 1996, and is based in Kingston Ontario where he runs the Sonic Arts Studio in the Dan School of Drama and Music at Queen’s University. Recent projects include the outdoor sound installations Octet (2016) and Into the Middle of Things (2017, with LJ Cameron), which are based on research into the life and work of Bill Gunn. In 2021 Rogalsky will begin publishing electronic compositions from a series entitled Revisitations, with a new release on XI Records. 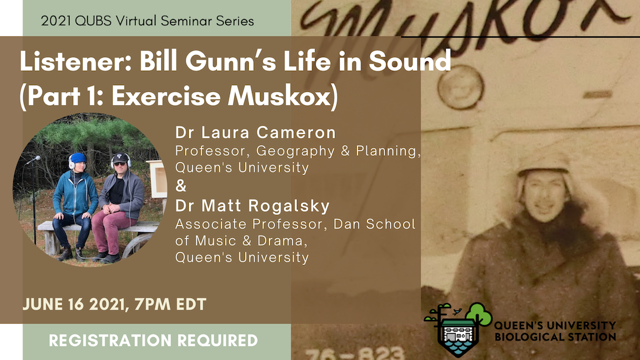